Owning the Way we Manage Communities

Regardless of our origins, likes, or dislikes, there’s no doubt that humans are social animals who prefer to roam in packs rather than solo. Being in groups is a fundamental part of our nature, an instinctive need to congregate and share stories—even before we formally developed language. In a very short period (considering the planet’s existence) we’ve evolved rapidly to augment the capacity of our communication, fostering interactions across the globe and in different languages, finding common grounds even between the most diverse of cultures. Our migratory possibilities have made us more mobile, amplifying our presence across the territories. From subsisting in caves and moving as nomadic tribes, humans eventually determined that settlements were the most beneficial modes of living, a way of establishing roots in environments where they could thrive.

How did communities start?

The first formal communities in the US began around 1910, as a response to the fast urbanization resulting from the Industrial Revolution that created the need for cities where workers could live in proximity to each other and the factories where they worked.

By 1935, the US government officialized the Federal Housing Act, financing housing on a national scale, propelling the pace of suburban residential development.

The Federal Highway Act of 1956 was created, a decree that fostered the creation of suburban residential developments (think Baby-boomers and white-picket-fence homes).

By the 1970s, the country had a homeownership boom, increasing the number of associations from 44% to 64% to reach around 17,000 associations nationwide.

A decade later, the world began an information revolution and the digitization of our lifestyles, with communication, news, and technology intersecting across different formats, leading to a human convergence that migrated towards the epicenters where the information was being created. This spurred the residential hyper-growth of the 1990s, an expansion that provided 130,000 community associations for approximately 30 million residents flocking to the global capitals and satellite cities. This cultural shift built the foundations for a new collective intelligence of quantic interactions, one that required a technological toolset that allowed the Homo sapiens to actively participate in decision-making processes and perform novel tasks seamlessly. The rise of the smartphone opened a new universe of platforms and possibilities for better living.

Fast-forward to 2020: a global pandemic took humans by storm, prompting a series of mandates that limited our migratory experience, sheltering us in our homes, and limiting our social interactions. As we bunkered and questioned our resilience, life’s responsibilities were still latent and made us rethink the way we operated—from our school system to our entertainment needs, hospitals to apartment complexes. At this point in history, the US was reaching 350,000 associations that had to reassess the workflow and logistics of what used to be a drifting population, now locked in one place, demanding a return to normality.

By 2040, the housing market expects to see 50% of the US population occupying one of the half-a-million buildings that will serve as the abode of a growing number of inhabitants. 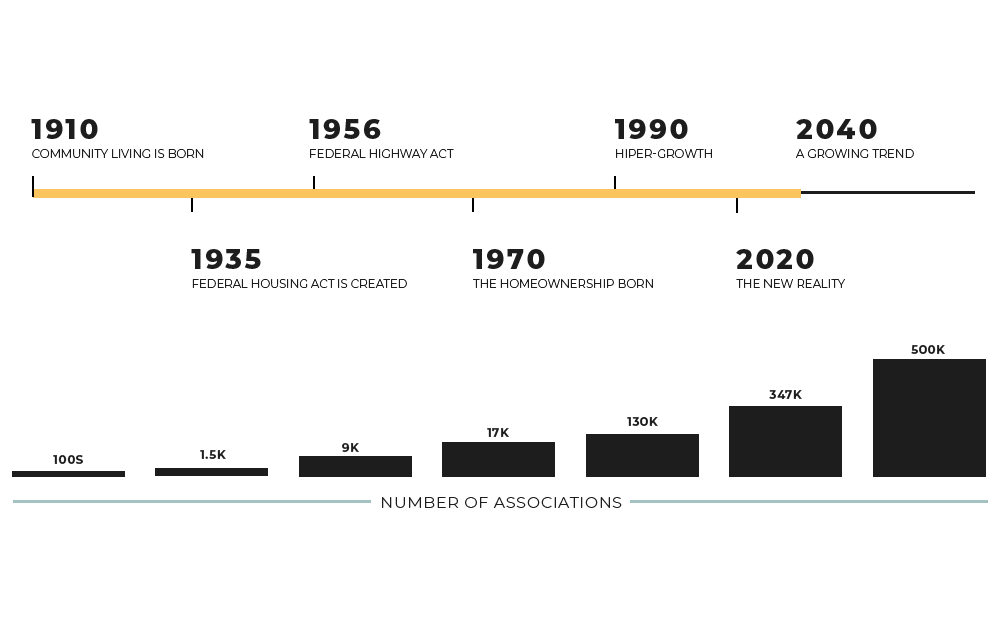 ONR arrived as a stroke of luck for managers and board members dedicated to the smooth running of their properties. This multi-functionality app tackles their (and the resident’s) necessities—from direct communication with the front desk to the autonomous reservation of amenities, facilitating electronic voting and the tracking of package delivery.

As the restrictions changed, so did ONR, accommodating to the challenges of bringing life back to a familiar functioning, easing our daily operations while considering the official mandates, co-creating a worthy quality of life within this new paradigm. At present, we’re entering a point of reality that’s substantially different from that we experienced before COVID-19, with just one certainty: the booming of associations is an upward trend that won’t slow down. ONR will continue to be a witness of this expansion, working hand-by-hand with the residents and managers, co-creating the future of living together.